I published my previous personal progress update on April 14th. That was over a month ago. Almost two. I felt like it had come on the heels of the update before it. (It didn’t.) Now I feel like this one is coming in even faster. (It isn’t.)

Time flies, and time doesn’t care if you’re having fun.

How are things going?#

I have no complaints. A lot of good things have happened in the last couple of months and I’m immensely grateful for that.

I’m still reading a mix of articles and books and whatever else crosses my feed. Shoutout to Mercury Reader, it’s super useful for consuming long-form content. I’m curating snippets of my reading to my new Listed blog.

+ I wrote a summary of The Culting of Brands last week, as my work is teetering back towards community. Then I chomped through The Five Dysfunctions of a Team, an interesting business book delivered as a fictional narrative.

There’s a few more non-fiction reads taking up space on my Kindle, but I’m feeling drawn back towards science fiction and fantasy.

I haven’t touched anything from Brandon Sanderson since completing the Wheel of Time a few years ago. I hear his Mistborn and Stormlight series are both great, so I might crack them open over vacation.

My writing is coming along. I’ve written two GoDaddy Pro community updates so far: one for May and one for June. They’re a blend of short essays and curated links, a nice bit of content n’ community packaged together. I’m adapting the structure with each iteration.

The roadtrips continue. These are the pinnacle of our “family time”. Roadtrips are immersive with long conversations, new places, and different experiences.

We’re off to Italy this month for a romp around Tuscany and northern regions. It’ll be my first time driving in Europe and I’m excited for it.

+ I’m trying to get better at taking out my phone and capturing snapshots on a whim. I’m back on my old Instagram handle, @andy.mcilwain.

I’m cycling more often, but it’s not a return to a “healthy lifestyle”. I rode in the 2019 NewRoads LakeRide a couple weeks ago and will ride again in the 2019 Ontario Ride to Conquer Cancer this weekend.

Despite all that, I’ve regained the weight I lost last year, creeping back up to where I was a couple years ago.

We went from being a keto household to being a vegan household but I’m not physically active enough to burn all the carbs I’m consuming again.

I have some ideas on how to fit these into my weekly routines over the coming months. Will see how it goes…

A selection of recommended reads.

The rise in paid email newsletters: “What’s old is new again. After obsessing over reaching massive audiences to make a living off minuscule online ad rates (which sometimes only pay pennies per thousand readers), individual writers and publications are returning to newsletters to make money directly from their audiences. And it doesn’t hurt that newsletters go directly to people’s inboxes, freeing them from social media’s algorithmic whims.”

Farnam Street’s annual letter to members: “Email lists are the best way to reach people directly. With email, there are few barriers between the content creator and the reader. Getting into someone’s inbox is like getting into their bed: it requires an invite.”

Reimagining the Morning Briefing: A look at how the NY Times redesigned their Morning Briefing newsletter. I appreciate teams taking the time to document and share this sort of work. There are bits and pieces we can take away and apply to our own projects. It’s open source thinking, beyond software.

On compounding knowledge: “While most of us focus on consuming information that we won’t care about next month, let alone next year, Buffett focused on knowledge and companies that change very, very slowly or not at all. And because the information he was learning changed slowly he could compound his knowledge over time.”

The vitality of customer relationships: “Businesses bring the most value when they build an entire relationship, rather than just a product or service, around creating value. Generally speaking, the more ways you can bring value, the more loyal customers are to your team and the greater the sustainable growth your business can achieve over time.”

Pay more attention to your customers: “In a poll of 1000 business leaders we found that more people took the time to read what other people were saying about their customers, than people did to stop and talk to their own customers. We’ve got a mental block stopping us from paying attention to our customers.”

Miserable humans can do great work: “It bears repeating: Miserable human beings who you wouldn’t want to spend a second with in real life are capable of making something great that is beautiful or useful to you. That is, in fact, the whole point of art. (It’s currently an unfashionable belief, but it’s true.)”

Everything is for sale, including us: “As a writer, I am part of the 35 percent of the American work force that now works freelance in some capacity, either as a main source of income or as some kind of side hustle. This number is growing constantly — 94 percent of the new jobs created in the last decade or so were freelance or contract-based.”

Making time for important work: “Another default is that I should fill up my 40-hour week and be as efficient as possible. I should play Tetris with my calendar and pack it as full as I can. Then I’m full, I’m busy, and I’m productive. Those are the defaults, and they’re crazy. They actually get in the way of us doing what’s the most important.”

Making order of the chaos in our lives: “To maintain our health, relationships, careers, skills, knowledge, societies, and possessions requires never-ending effort and vigilance. Disorder is not a mistake; it is our default. Order is always artificial and temporary.”

Zdog is making the rounds (ha!) on newsletters and blogs because it’s hella neat and useful: “Round, flat, designer-friendly pseudo-3D engine for canvas & SVG.” Check it out. 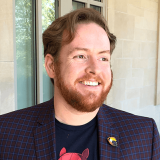